… an internet resource for the curious …

The co-operative trick-taking game The Crew from Thomas Sing and KOSMOS has won yet another award — the 2020 Deutscher Spielepreis [DSP]. The DSP is determined by the votes of gamers, who rate their top five games from the previous year, in addition to naming their favorite children’s game. Those votes are then tabulated, and here’s the list of games that received the most votes in reverse order:

10. Paladins of the West Kingdom 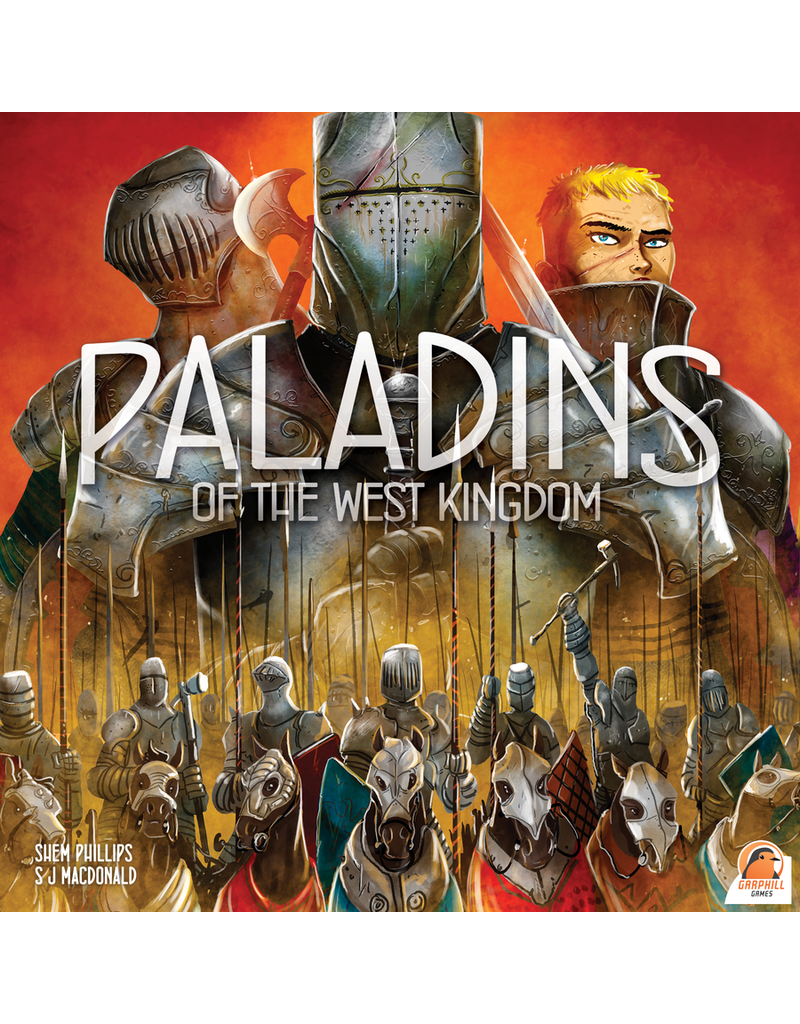 Paladins of the West Kingdom is set at a turbulent time of West Francia’s story, circa 900 AD. Despite recent efforts to develop the city, outlying townships are still under threat from outsiders. Saracens scout the borders, while Vikings plunder wealth and livestock. Even the Byzantines from the east have shown their darker side. As noble men and women, players must gather workers from the city to defend against enemies, build fortifications and spread faith throughout the land. Fortunately you are not alone. In his great wisdom, the King has sent his finest knights to help aid in our efforts. So ready the horses and sharpen the swords. The Paladins are approaching.

The aim of Paladins of the West Kingdom is to be the player with the most victory points (VP) at game’s end. Points are gained by building outposts and fortifications, commissioning monks and confronting outsiders. Each round, players will enlist the help of a specific Paladin and gather workers to carry out tasks. As the game progresses, players will slowly increase their faith, strength and influence. Not only will these affect their final score, but they will also determine the significance of their actions. The game is concluded at the end of the seventh round.

9. Marco Polo II: In the Service of the Khan 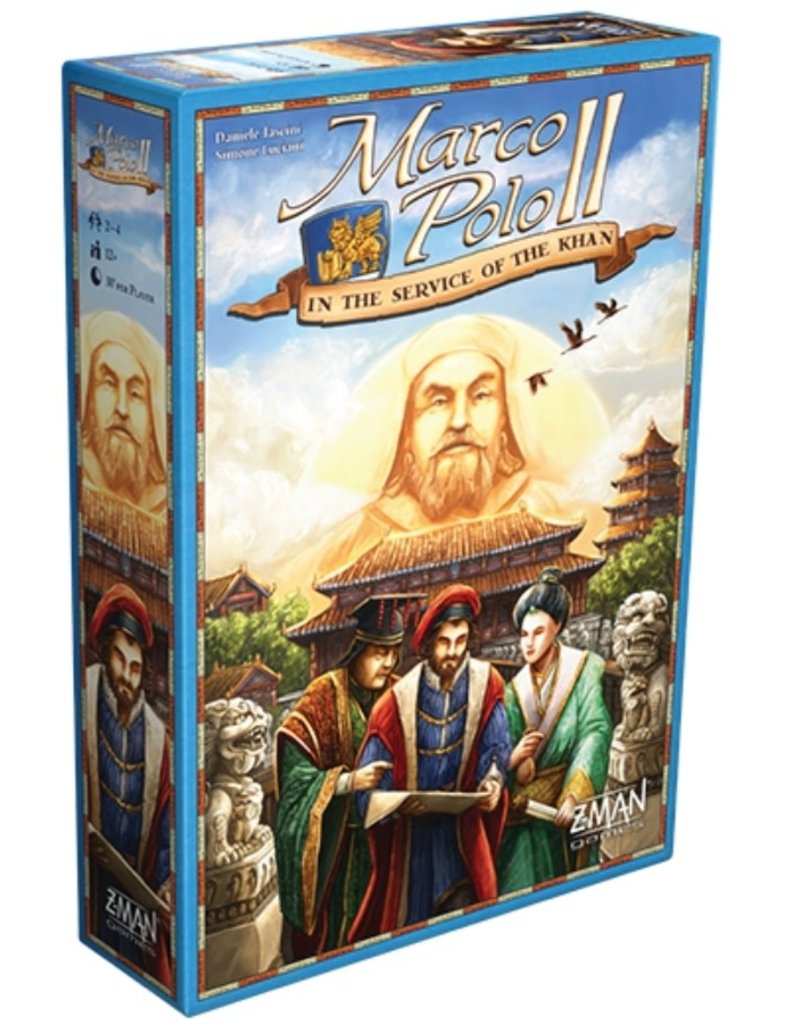 Marco Polo II is a standalone game based on The Voyages of Marco Polo, and you don’t need the original game to play this one. This new journey will present unique challenges, with new and different actions, new scoring rules, and a new good: rare and valuable Chinese jade.

Retread old paths with renewed purpose, or find new ones as you explore farther west, continuing to build the immortal legacy of Marco Polo! 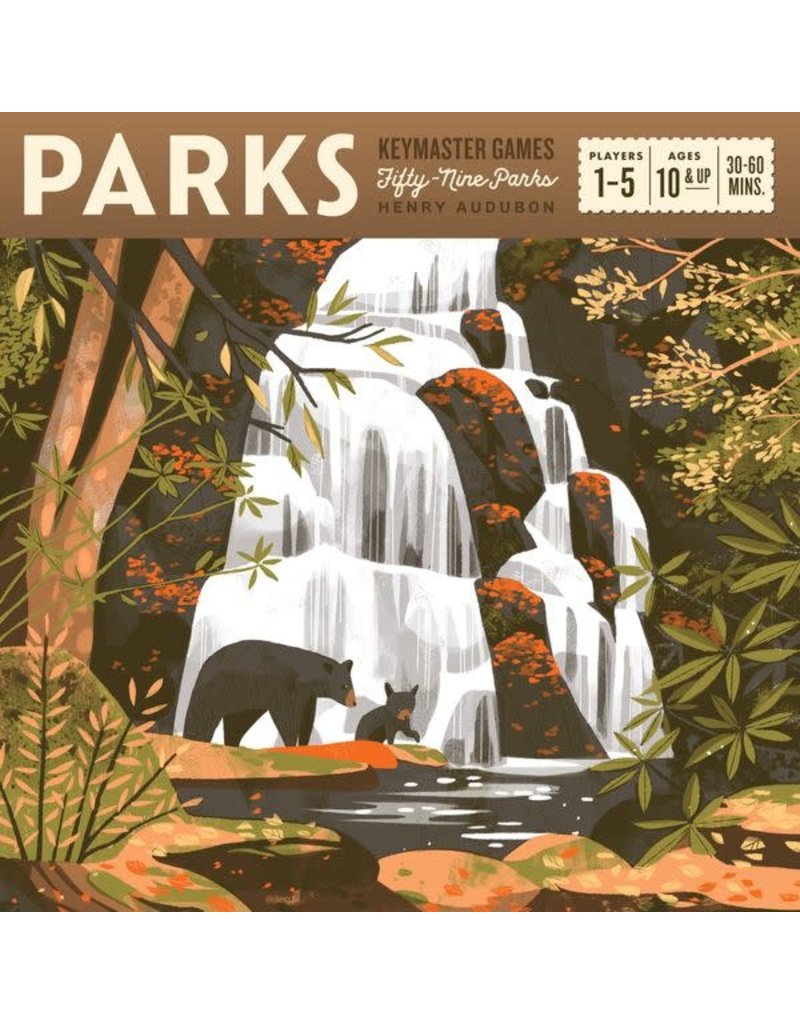 PARKS is a celebration of our National Parks featuring illustrious art from Fifty-Nine Parks.

In PARKS, players will take on the role of two hikers as they trek through different trails across four seasons of the year. While on the trail, these hikers will take actions and collect memories of the places your hikers visit. These memories are represented by various resource tokens like mountains and forests. Collecting these memories in sets will allow players to trade them in to visit a National Park at the end of each hike.

Each trail represents one season of the year, and each season, the trails will change and grow steadily longer. The trails, represented by tiles, get shuffled in between each season and laid out anew for the next round. Resources can be tough to come by especially when someone is at the place you’re trying to reach! Campfires allow you to share a space and time with other hikers. Canteens and Gear can also be used to improve your access to resources through the game. It’ll be tough to manage building up your engine versus spending resources on parks, but we bet you’re up to the challenge. 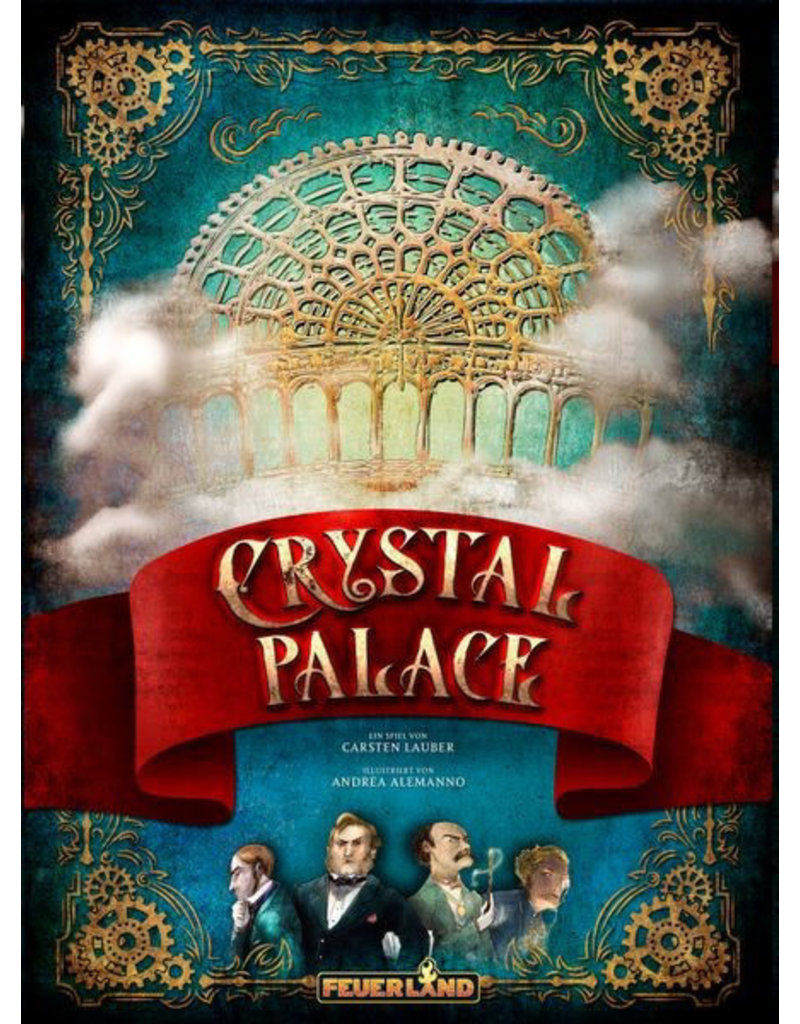 In Crystal Palace, players take on the role of a nation at the time of the first World Fair in London (1851), trying to create a buzz with spectacular inventions and the support of famous and powerful people.

Crystal Palace is a dice-placement game in which the players themselves determine the stats of their dice at the beginning of each round.

The higher the number, the better — but it comes at a price. In the course of the game, dice are placed on eight action locations (Patent Office, Reform Club, London Times, Port of London, Waterloo Station, British Museum, Bank of England, Westminster) in a competition for the best resources, patents, and brains.

In a world of slightly weird inventions, you will meet people like Phileas Fogg, Levi Strauss and Amelia Edwards, and invent gadgets such as the Thinking machine, the Beer glass counter or the Climate changer. 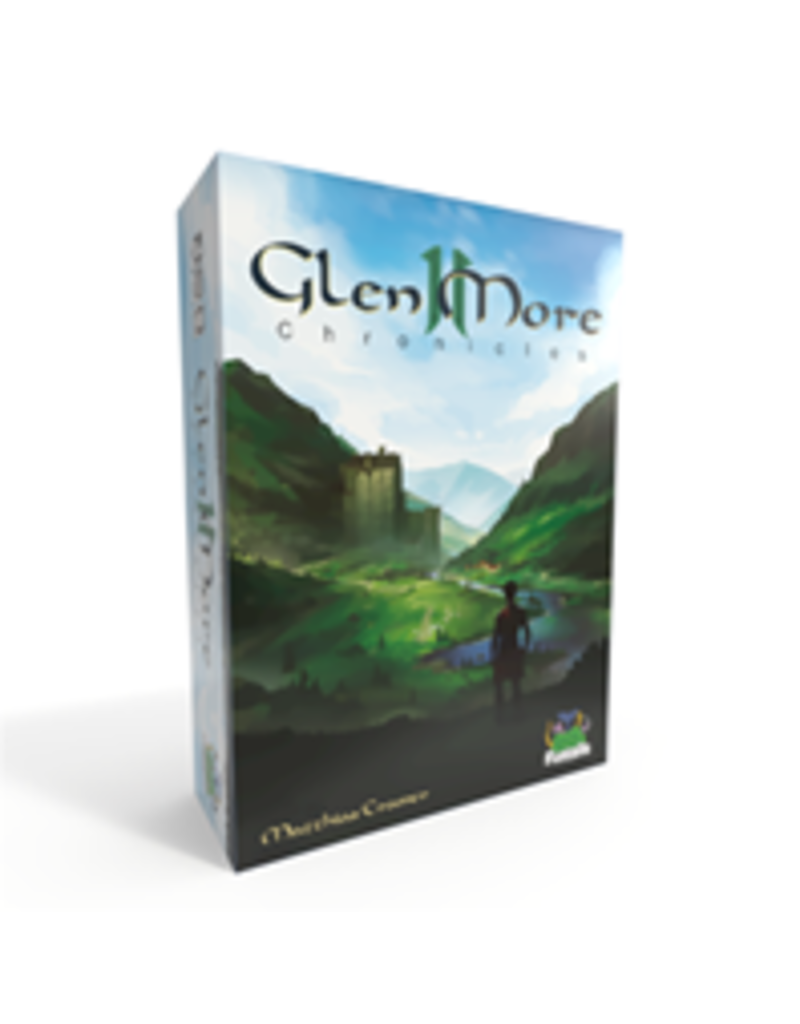 In Glen More II: Chronicles, each player represents the leader of a Scottish clan from the early medieval ages until the 19th century, a leader looking to expand their territory and wealth. The success of your clan depends on your ability to make the right decision at the right time, be it by creating a new pasture for your livestock, growing barley for whisky production, selling your goods on the various markets, or gaining control of special landmarks such as lochs and castles.

The game lasts four rounds, represented by four stacks of tiles. After each round, a scoring phase takes place in which players compare their number of whisky casks, scotsmen in the home castle, landmark cards, and persons against the player with the fewest items in each category and receives victory points (VPs) based on the relative difference. After four rounds, additional VPs are awarded for gold coins and some landmarks while VP penalties are assessed based on territory size, comparing each player’s territory to the smallest one in play.

The core mechanism of Glen More II: Chronicles and Glen More functions the same way: The last player in line takes a tile from a time track, advancing as far as they wish on this track. After paying the cost, they place this tile in their territory, with this tile activating itself and all neighboring tiles, triggering the production of resources, movement points, VPs, etc. Then the player who is last in line takes their turn.

Improvements over the original Glen More include bigger tiles, better materials, new artwork, the ability for each player to control the end of the game, and balancing adjustments to the tiles for a better suspense curve. The game is designed to consist of one-third known systems, one-third new mechanisms, and one-third improvements to Glen More.

The “Chronicles” in the title — a set of eight expansions to the base game — are a major part of these new mechanisms. Each Chronicle adds a new gameplay element to the base game. The “Highland Boat Race” Chronicle, for example, tells the story of a boat race in which the winner needs to be the first to reach their home castle after navigating their boat along the river through all the other players’ territories. The “Hammer of the Scots” Chronicle adds a neutral “Englishman” playing piece to the time track that players struggle to control to get an additional turn — if they can afford him, that is, as he is paid using the market mechanism. All Chronicles can be freely combined, although designer Matthias Cramer suggests that players use only one or two unless they want a “monster game”.

Another major change to the game is the ability to invest in famous Scottish people of the time, who are represented through a new “person” tile type. Persons not only have their own scoring, they also trigger one-time or ongoing effects on the tactical clan board. This adds a new layer of decision making, especially since the ongoing effects allow players to focus on a personal strategy of winning through the use of the clan board. 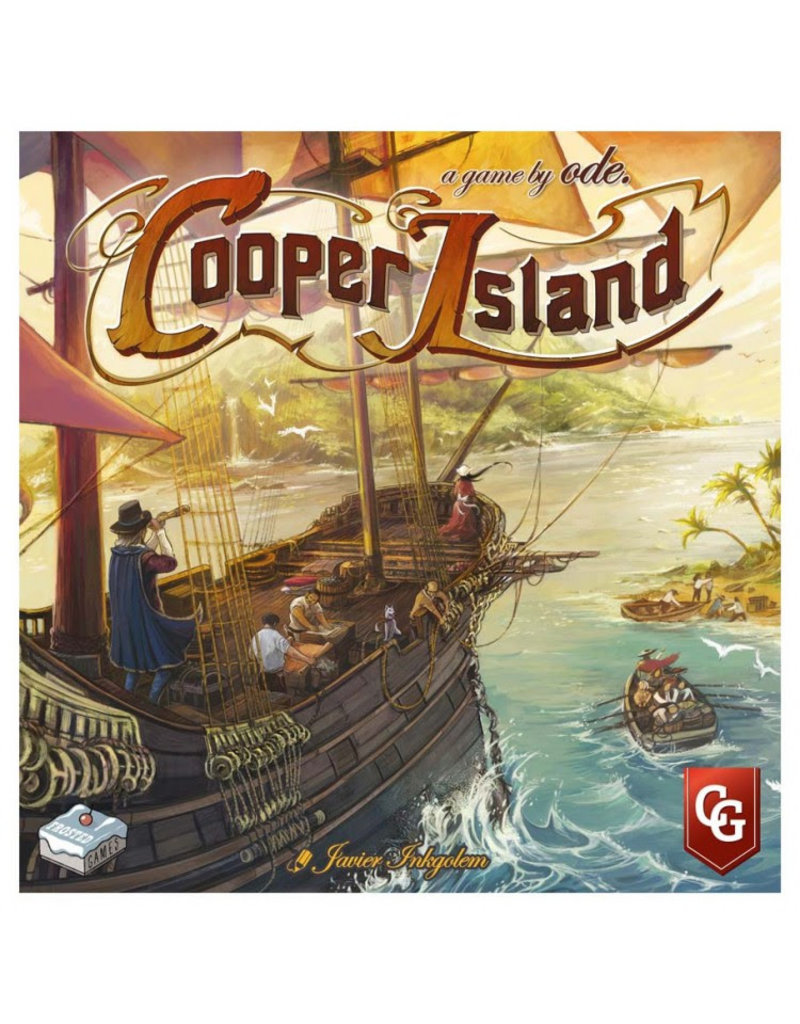 In the age of exploration the players arrive at a new home far away from their homeland. They try to colonize the big island and each player tries to explore one part of it by placing landscape tiles. Landscape tiles grant resources and those are used to erect buildings with special abilities. Barriers on the island have to be removed in order to explore the island even further.

Players build valuable statues and supply ships get them the supplies from the old world they need to be a successful settler on Cooper Island.

The special thing about Cooper Island is the way the players mark their victory points. They take small ship markers around the island to show their progress. On their way around the island they find smaller islands inshore that grant valuable benefits. After five rounds, a game of Cooper Island ends and the player who developed the best and went on furthest with their ships will win. 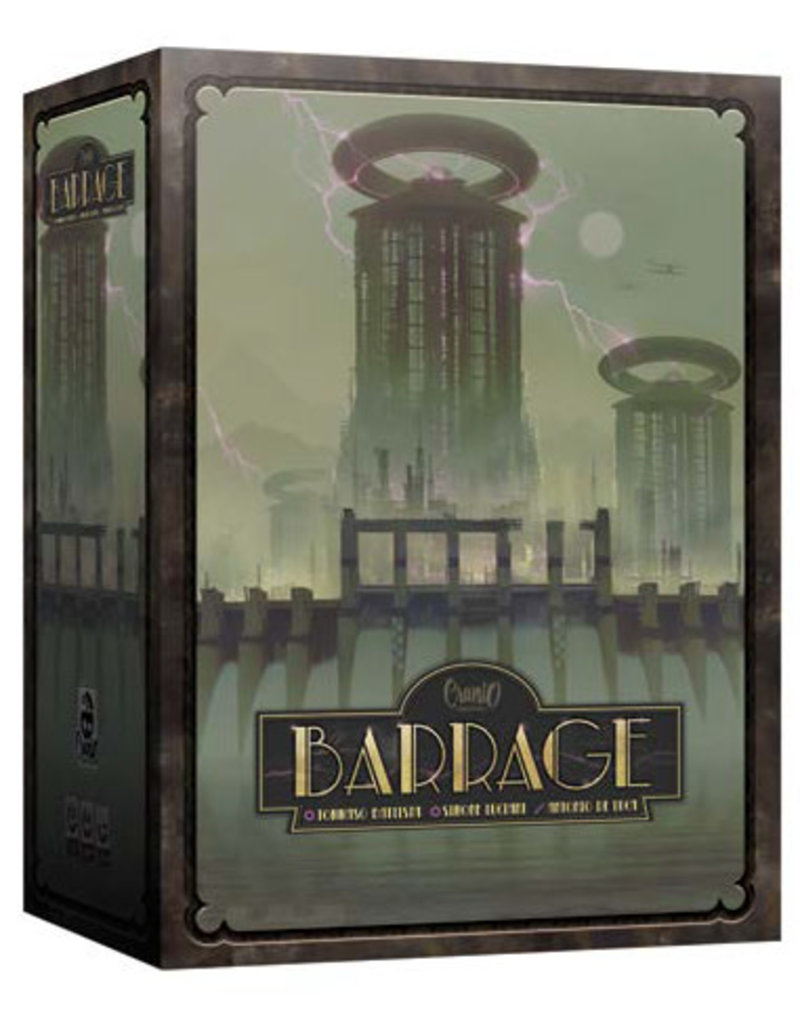 And so begins the Water War …

Year 1922. The cannons of the Great War remain silent for four years, the world is recovering, rising from its ashes at the speed of new hydroelectric technology, a legacy of the great Nikola Tesla. A new war, which will be fought in the valleys of the Alps, is about to begin: Will you be able to defeat your opponents and build the largest hydroelectric empire the world has ever seen?

Barrage is an epic worker placement strategy game. Up to four players will compete for five rounds, planning their actions to build hydroelectric infrastructure on an articulated and challenging map. You must place your structures wisely, preventing your opponents from stealing the most precious resource: water.

If you control the water, you will be able to produce energy and complete profitable contracts. Plan each movement carefully, and prepare to make bold strategic decisions: This is Barrage ! 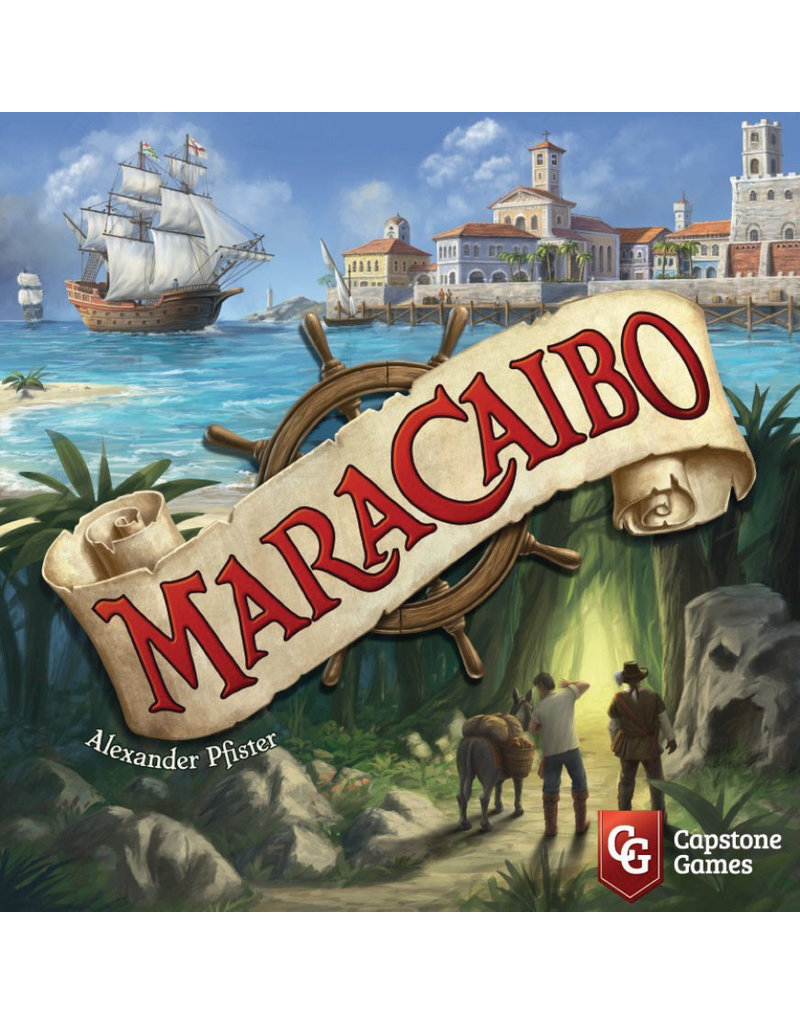 The Caribbean in the 17th century: you are Seafarers and adventurers, trying to increase your reputation with various nations, establish strong alliances, and obtain wealth and fame.

Only if you manage to successfully implement your plans, victory shall be yours! This can be achieved through different strategies, upgrading your ship to a mighty vessel, engaging in combat, working as a privateer, building a network of assistants, setting off on expeditions, fulfilling quests, and much more.

Immerse yourself in a colorful world full of adventures and opportunities. Climb aboard and set sail for maracaibo! A unique story mode: you can optionally play maracaibo as a campaign, experiencing an exciting story as you go. In the process, several surprises change how the game plays out! Find out what your Destiny holds for you! 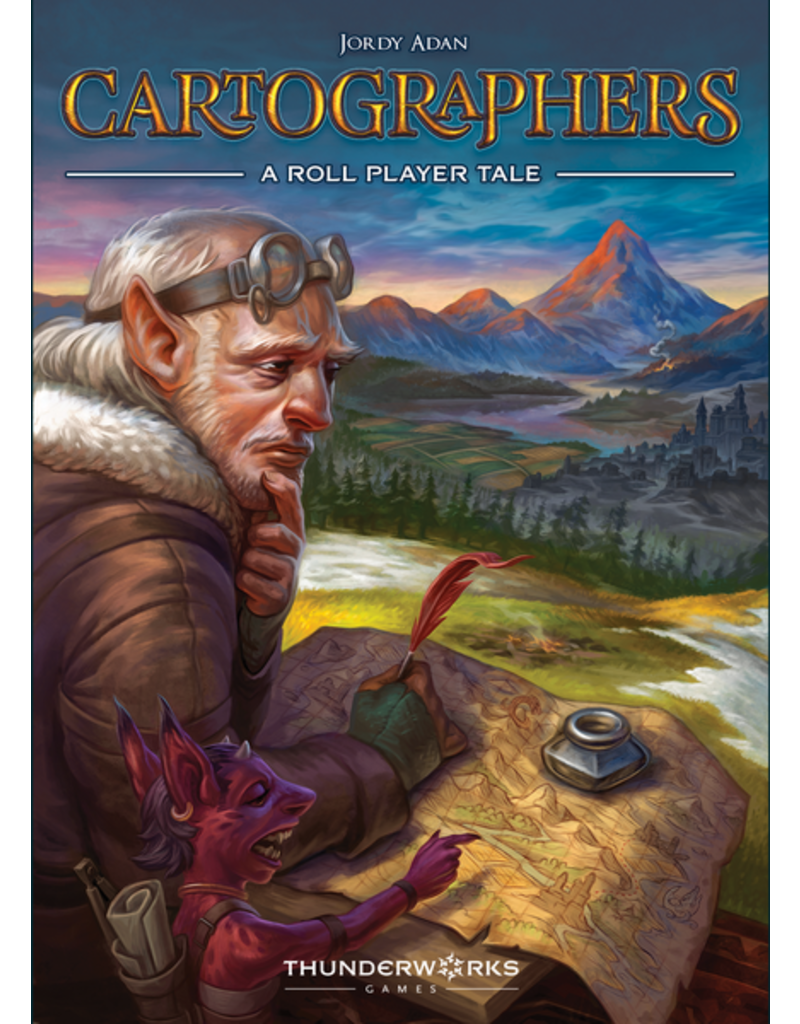 Queen Gimnax has ordered the reclamation of the northern lands. As a cartographer in her service, you are sent to map this territory, claiming it for the Kingdom of Nalos. Through official edicts, the queen announces which lands she prizes most, and you will increase your reputation by meeting her demands. But you are not alone in this wilderness. The Dragul contest your claims with their outposts, so you must draw your lines carefully to reduce their influence. Reclaim the greatest share of the queen’s desired lands and you will be declared the greatest cartographer in the kingdom.

In the co-operative trick-taking game The Crew: The Quest for Planet Nine, the players set out as astronauts on an uncertain space adventure. What about the rumors about the unknown planet about? The eventful journey through space extends over 50 exciting missions. But this game can only be defeated by meeting common individual tasks of each player. In order to meet the varied challenges, communication is essential in the team. But this is more difficult than expected in space.

The team wins only if every single player is successful in fulfilling their tasks.

Select a Game to Play